Voltaire's B*st*rds: The Dictatorship of Reason in the West by John Ralston Saul. A Review.

Alhamdulillah (all praise to God), after much brooding, I finally understood the crux of this book. It actually stems from these two schools of thoughts: Socrates's and Plato's. 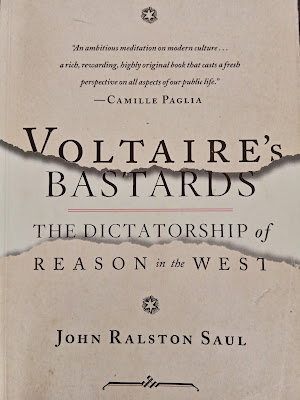 To put it simply, Socrates believes in the societal well being through the establishment of an ethical system that is built upon human reason [1]. To arrive at that ethical system, Socrates would questioned and challenged people what true ethics actually is. When the assumption of ethics that people held are challenged, Socrates had instilled doubt; to which this book claims the Westerners' lack. This lack of doubt and attention towards the societal well being are the main causes for the degradation of the Western civilization.

On the other hand, the philosophy expounded by Plato attempts to answer what true ethics, or basically the truth of everything, is. According to Plato, everything has an ideal or form in another world that is unchanging. This is termed as the Theory of Forms [2][3]. Since there indeed exists a form or a true answer to the questions raised by Socrates in his dialogues with the people, little doubt is left. So, people just need to think critically, and use all the five senses (vision, hearing, smell, taste, touch), what is the closest ideal version or the closest form of something in this world is. Using the five senses also means taking reality (of this world) into account. As such, this book argues that the West is obsessed with finding the forms of this world through efficiency and professional methodology (employment of technocrats); and views reflection (arising from doubt) as inefficient and the well being of society as secondary (I will argue later why despite thought and the use of five senses, well being of society is not primary). As such, the opening of this book argues that Plato's philosophy has put less emphasize on humanism that his mentor, Socrates, has preached. I, however, humbly disagrees.

Plato did say to take into account reality. The reality is that majority of Westerners value individual freedom more than societal well being. In other words, the West views individual freedom as the form of ethics, and that translates as the reality of this world. Thus it is not that Plato's philosophy is wrong, but it is the people's thought process and the use of five senses that had led to the assumption that individual freedom is the form of ethics. This belief is so ingrained in Westerners so much so that there is no doubt about it. Yes, despite this issue, the conclusion to the problem is still lack of doubt, similar to what Saul (2013) have said in this book. Yet again, I will also show one crucial point from the philosophy of Plato that the book did not highlight.

Saul (2013) had given countless real life examples where efficiency and professional methodology fails to solve a particular problem. He asserts that the current system that we have, politics, education, finance, economy, basically almost everything, are in shambles. The author pinpointed the source of the structural problems to the lack of humanism; where its foundation was built excessively on the Theory of Forms, the discouragement of doubt to permeate, and the inconsequential of societal well-being .

I feel that I need to tackle one particular system or two, in particular education, in particular social science, in particular finance and economics. These are two fields of study that I am familiar with. But this requires, God willing, another blog post for it will be quite lengthy.

Remember before I said that Saul (2013) had missed one important point about Plato's philosophy? That point is the form exists in another world that is unchanging and constant. So frankly, there is no perfect solution for this world. That world i.e. another world that Plato expounded, as to my belief, should be the afterlife. Plato himself was not able to arrive at that conclusion because his philosophical thinking, even Socrates's, does not take religion into consideration. They did not acknowledge, or was not able to arrive at the deduction, that there exists a Supreme Being that is All Knowledgeable.

By extension, try reflecting on this phrase:


Like most religions, reason presents itself as the solution to the problems it has created.

Saul (2013) had written this phrase in the opening vignette in Part I Argument of his book. Reading this statement in passing, one would think that the author views religion in askance for religion is the one who had created these problems in the first place and without shame, claims that it has the solutions.

Yet, notice that Saul (2013) said most religions. Meaning, one can also interpret that the author believes that there exists few religions that can provide answers to mitigate problems that these few religions did not create. Or perhaps Saul (2013) is simply being neutral? I would like to assume that he is in the former category.

In my humble opinion, we should combine doubt, the theory of forms, and religion (or ideas that you can get from it) to arrive at a solution that balances between societal well being and individual well being. When problems of each unit of society (individual/family) is addressed, consequently, the problems of society as a whole will be addressed too. In addition, one cannot be complacent but must constantly evaluate from time to time (stemming from the virtue of doubt), whether the solution presented before, is still practical for the present and future. It is worth emphasizing that ideas from religion is quintessential as human has limit to his/her thinking capacity. Thus, it is only reasonable to deduce that there exists a Supreme Being that is All Knowledgeable, constant, unchanging, and never dies. Plato indirectly said so in his theory of forms.

Before I end this post, I would like to address the other crucial point that the book did not highlight, or probably even consider. Our thought process should be guided by our heart. Sounds corny, I know. But ponder on this example:
You have only $10 and you come across a homeless mother with a child crying out of hunger. Nearby, there's a food stall that sells food for exactly $10. You are hungry yourself. But if your thought process is guided by your heart, there is a very high possibility that you will buy the food for the child instead of you eating it yourself.
Thus in religion, one's thought process is guided by the heart or "eye of the soul" where in Malay we termed it as "matahati". Perhaps, the deduction that individual freedom is the form of ethics comes from the disregarding of matahati.

It is important to be mentioned here that our matahati needs to be guided too. And that guidance can only come from the All Knowledgeable.

Posted by Azniza Ambrose at 2:09 PM No comments:

On rare occasion, I would accidentally come across a book that is simultaneously unputdownable, on-point, well mannered in its words, and coincides with current world event. This is that book translated in English; On the Banks of Dajlah River: Travel to the City of Baghdad, Iraq. 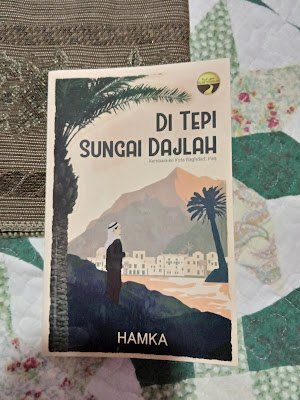 Di Tepi Sungai Dajlah narrates HAMKA's travelings in Iraq with a backdrop of the region's history. Due to the fact that I had visited Iran last year, the never ending Sunni-Shiite quandary, and the assassination of Iranian General Suleimani, I immediately felt an affinity to this book.

For this post, allow me to concisely discuss the lessons that we can derive from the Sunni-Shiite quandary within the context of this book.

Let me first state one thing (lest I'll be judge in the social media tribunal), that I am a Sunni and disagrees with the Shiite doctrine. Yet, I feel the pure hatred that half, if not majority of Malaysian Sunnis, have on Shiite has caused a dangerous rift between Muslims. I am well aware that there are fatwas saying that Shiite are not Muslims, but I will reserve my comments on this matter. Instead, let me turn your attention to HAMKA's narration in pages 75 to 78 [1] (brief explanation in English is provided after):

When HAMKA and his companion was in the tomb of Abbas, the mutawwif (guide) ask them to praise Muhammad the Prophet (may peace be upon him), then Ali, then Hasan, Husain, and finally Abbas. They did so. But when the mutawwif went into politics and ask them to curse/condemn the killer and the plotter i.e. Yazid, they refused to do so and just kept quiet. The mutawwif was not happy.

HAMKA then explains that they are Sunnis and Sunnis are not supposed to curse. Yet, they do love the lineage of the Prophet. The founder of the Syafie madhab, Imam Syafie himself was slandered in front of a king saying that he's the defender of Shiite. HAMKA proceeded in stating that he also appreciates the thoughts of one of the Shiite's ulama namely Syed Al-Mujtahid Al-Akbar Syeikh Al Kasyif Ghita.

It is a known fact that Shiite originated from a political disagreement; the reason why I ardently believe the mutawwif had asked HAMKA and his companion to curse/condemn Yazid. Interested readers may read this book to know the exact account of this historic event.

To return back to our main purpose, we can certainly derive two important lessons from HAMKA's narration in pages 75 to 78:
(1) Politics combined with any supremacist ideology can lead to a treacherous schism
(2) Yet, a bridge can be built over the schism by speaking the truth kindly and wisely

Certainly, in this dark age where people defined freedom of expression as freedom to express crudely, it is refreshing to read how HAMKA stood firm on his faith and politely disagreed. At the same time, he had also been respectful and sought common ground to further diffuse the tension. Nowadays, this courteous manner is almost an art form. I give this book 5 stars.

Posted by Azniza Ambrose at 11:08 PM No comments:

The Death Instinct by Jed Rubenfeld

Death is only the beginning; afterward comes the hard part.


Immediately I was sucked into the story and found myself at Wall Street in year 1920. I could almost hear the bomb exploded and swore my ears were ringing among the civilians. When the story reminisced on World War 1, it is as though I was transported to the war zone itself. When the author introduced me to Sigmund Freud, Marie Curie, and Thomas Lamont, I was intrigued. As the story evolved towards the United States Treasury, a building on Wall Street, I got a sense of how monetary based on gold had worked before the Bretton Woods system collapsed. 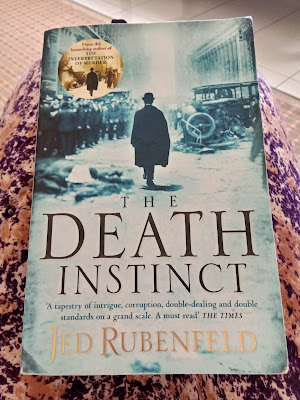 Indeed, for the first time in weeks my mind was able to wander and forget the mirage we call reality.

Unlike any other historical fiction I'd read, this book seeped right into my soul. The choice of words that the author used and the scene he depicted, revived something in me that I thought had long abated. That something is the thirst to write placidly, without chains.

As the book has given back a piece of me, I in return, give this book 5+ stars.

I just hope that I won't lose this piece of me again.
Posted by Azniza Ambrose at 8:37 PM No comments:

Azniza Ambrose
I am a distracted, ill managed idealist ambivert with dreams to change the world! So most of my blog posts concern topics that force people to think and feel (well, I try). You can also find me on Booksie.com!

Come and read my first novelette for free! 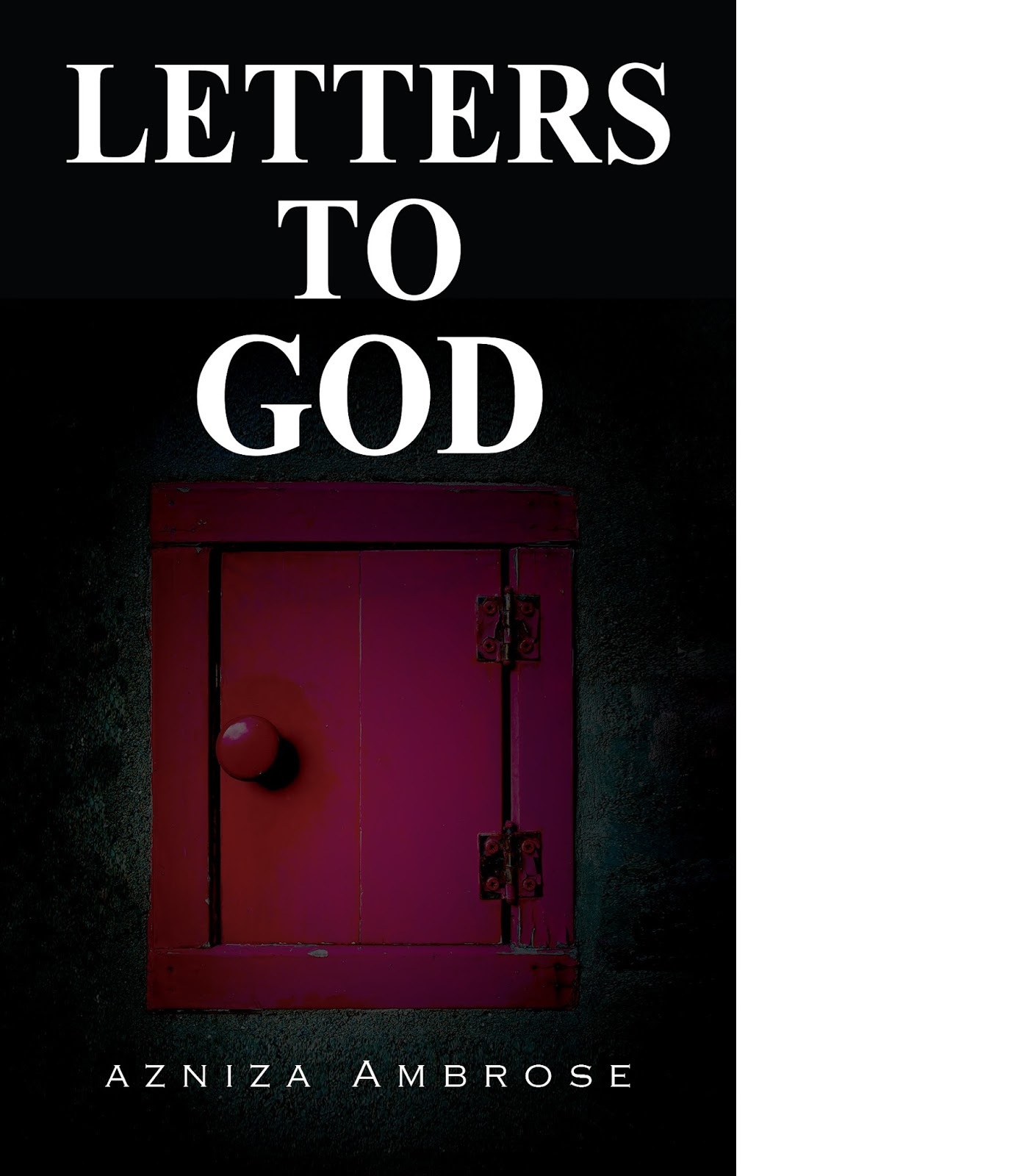 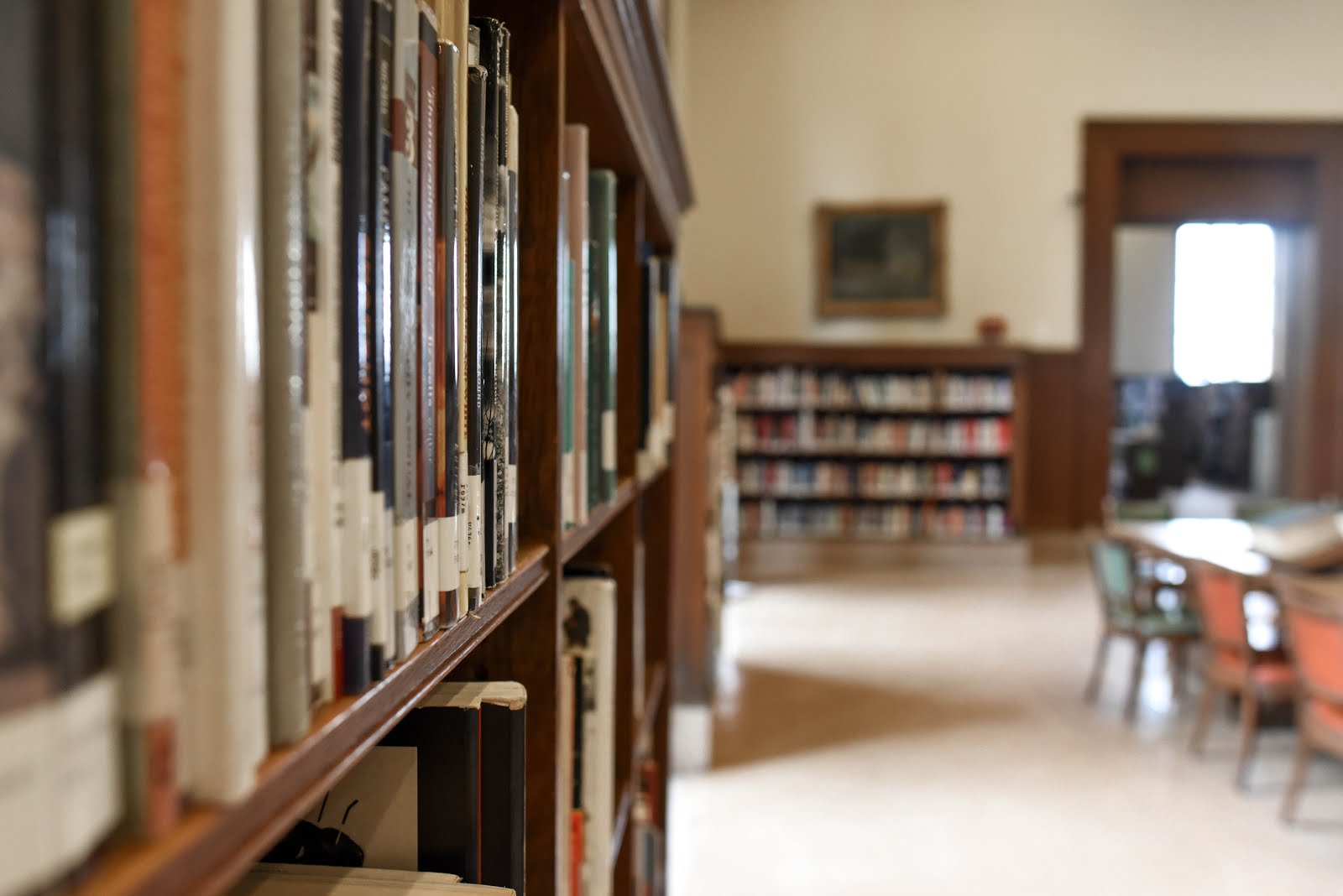 Show your moral support by liking me on Facebook: 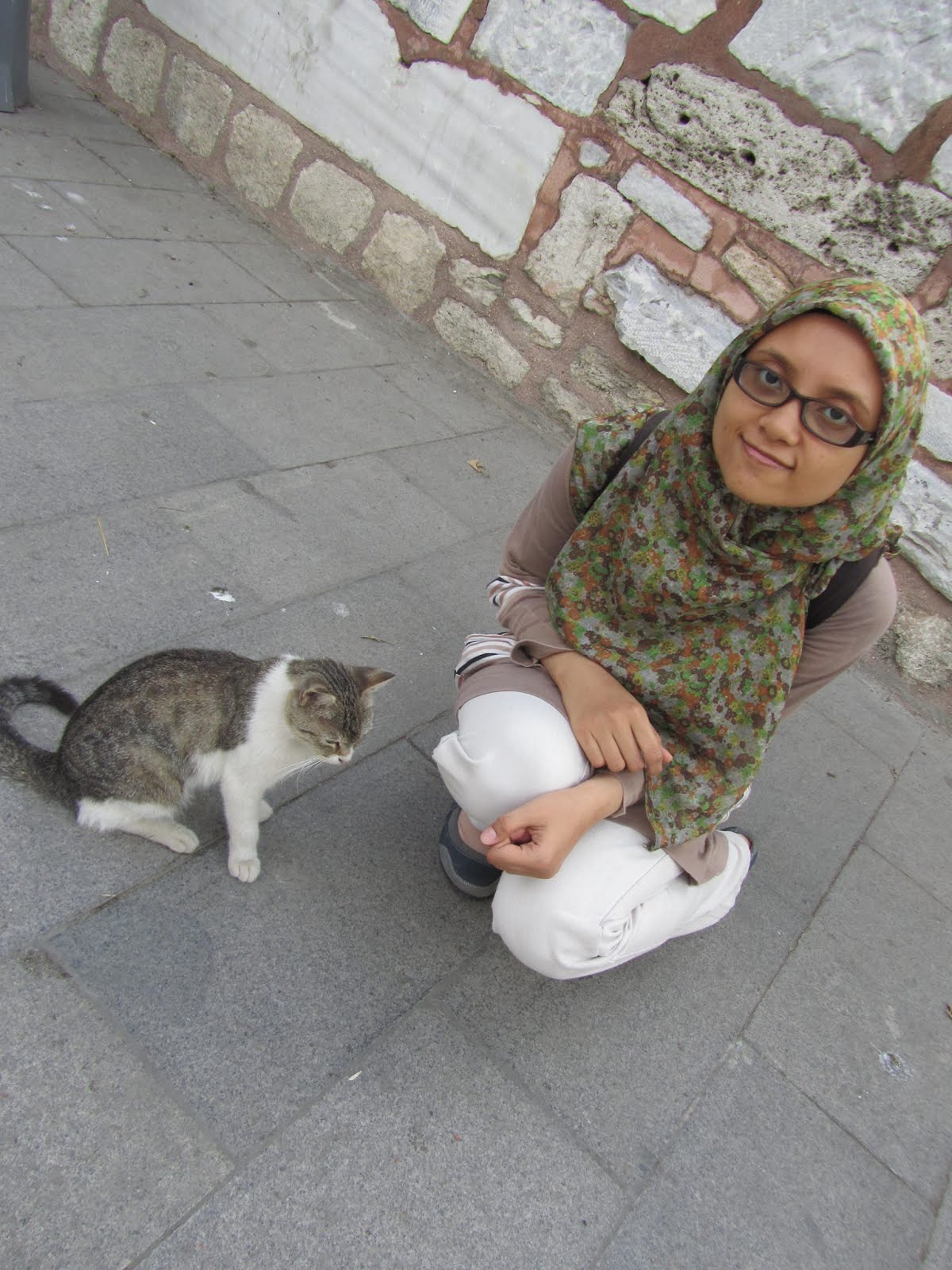 Love what I post? Get my blog updates right in your mailbox